Learn more about our completed projects and the latest news!
References 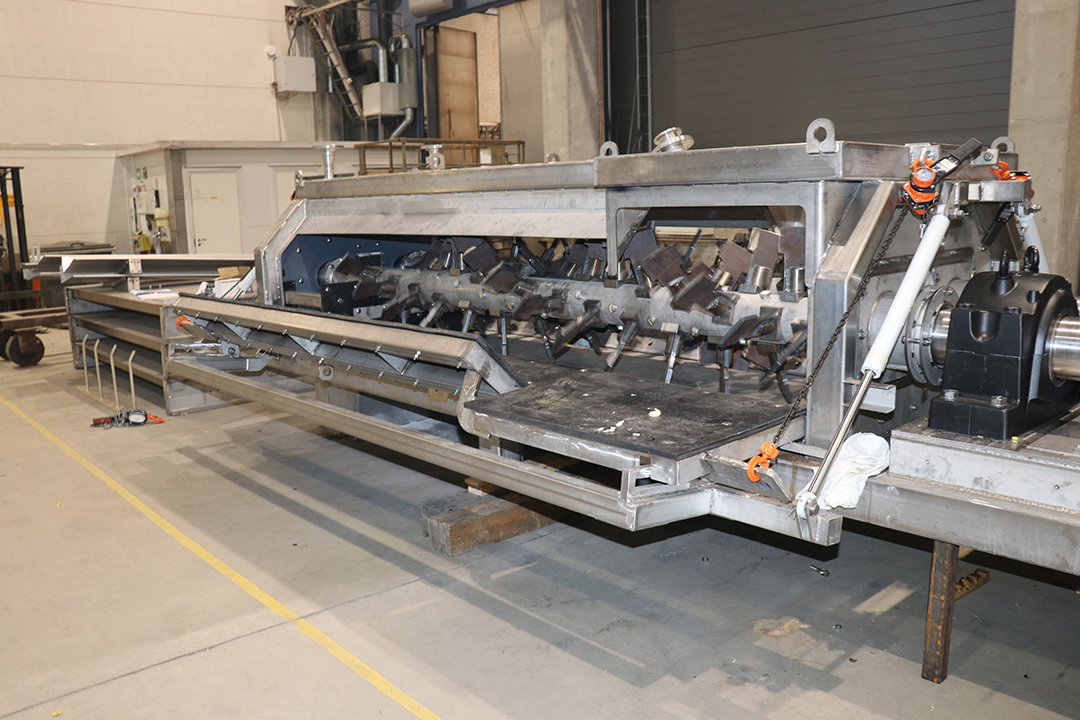 It is a concrete mixer that mixes cement, water, and tailings into concrete. The end product is pumped underground to fill the excavations. The original concrete mixer had become worn and was practically at the end of its service life, so Agnico Eagle decided to replace it.

The rotation of the mixer paddles was carefully adjusted

The mixer was made from stainless steel (AISI 304) which required an experienced welder to work with such a large piece of metal. Steel and iron bend a certain amount when exposed to heat. The distortion in stainless steel is even greater.

“We learnt more about managing the distortion in connection with this project,” says design manager Pasi Knuuttila from Simetek.

One challenge of design was the rotation of the mixer paddles. Each rotation had to be separately adjusted to make sure that the paddles do not hit each other. The decision was made to use a special gearbox in the mixer, with axles that rotate at exactly the same speed but in opposite directions. The paddles were placed on the axles such that opposite axles were mirror images of one another. The paddles are meant to mix water, cement and tailings, and to push the concrete through the machine.

The mechanical engineering of the mixer took hundreds of hours to ensure that everything worked flawlessly. Design began in February 2020, and the machine was installed at the Kittilä mine two years later in February 2022. Before design, the area was laser scanned so that the inlet and outlet connection pipes could be connected without any major changes.

“We designed, manufactured and installed the same kind of mixer that they had before, but an improved version,” says Knuuttila.

The old concrete mixer’s reduction gear was poor, and there was room for improvement in sealing the axle in particular. In addition, the mixer’s bearings could no longer withstand any load. A poor splitter also meant that the old mixer didn’t work as it should have. The seal was improved with a rope gasket, which required specialist expertise to implement.

The old gearbox was replaced with a special gearbox that was purpose-manufactured. The new gearbox, which no longer has a reduction gear, was also placed further away from the axles and has a better seal thanks to the rope gaskets. The gearbox was dimensioned, designed, and manufactured in collaboration with SEW.

“The solution is unique, as both axles are connected to the same gearbox. The box sticks onto the entire mixer like glue, so that’s why it was so important to adjust it. Success required seamless collaboration from the design, manufacturing, assembly and installation teams, or it would not have been possible to even get the gearbox into place,” says maintenance engineer Ringo Markkanen from Simetek.

Installation was planned in advance

Markkanen says that the assembly of the mixer sometimes required problem-solving skills. They overcame the challenges well. “All in all, this is an interesting overall solution, where everything affects everything else, and the unit had to also be watertight,” explains Markkanen.

Before installation work, Markkanen and Simetek’s project manager Ville Kinnunen went to check for any problematic areas at the Kittilä mine. Installation required the installation team to have expertise in switch alignment and welding. Good communication skills were also important, as installation also involved challenging lifting and hauling work, which had to be carried out fully as group work.

“Work was made easier because the design and installation teams were in close contact right from the design phase and considered lifting points and ways to implement the different work phases,” says Kinnunen.

One foreman and four engineers worked on the installation. The entire project, including preparation work, was completed in just under two weeks. The customer had organised a good environment for installation work.

Knuuttila says it was a pleasure to work with Agnico Eagle. Collaboration went well right from the start of the project, and we always received the information we needed. The customer agrees.

“Collaboration with Simetek was simple and the communication was good. The implementation of the entire project went very well. No complaints here. I’m very satisfied with the result,” says Haatainen from Agnico Eagle.